UPDATED 11/28/22 11:30AM (PST) The Battle Scars event section incorrectly said "spend 1 Campaign energy" when it should have said "Spend 1 Dogs of War Energy".

We hope you didn't spoil your appetite for information! Today, we're serving up a double portion of details that'll cover the next couple of weeks while our studio takes a break for the American Thanksgiving holiday. Read on, Commanders!

Recruit the spycraft expertise of Nakia on November 21st at 1:00PM (PST) with the Dogs of War Event Campaign! Join Nakia as she attempts to track down the person hunting members of the War Dogs, Wakanda's elite spy force.

The Dogs of War Event Campaign will feature a new structure that'll make obtaining Nakia character shards easier while giving you the opportunity to have fun with Nakia and her War Dogs in battle. Here are the details:

Battle through the Easy Campaign Missions to earn Nakia character shards directly from the first-time rewards, along with Covert Orb Fragments (details below), and Gold. Once you've recruited Nakia, you can attempt Hard Missions, although you can also Auto-Win the Easy nodes to gather more rewards, minus the Nakia shards.

After recruiting Nakia, you can attempt Hard Difficulty Missions. Battle with Nakia and other characters of your choice to earn more Nakia shards from the first-time rewards, along with Covert Orb Fragments, Gold, Catalyst Parts, and gear.

If you've recruited Black Panther (1MM) from The First Panther Event, along with the rest of the War Dogs team, you can test their might in the Heroic Difficulty. Battle through Heroic Missions with Nakia and the complete War Dogs team to rack up Nakia shards and Teal gear, among other rewards. Heroic will reward the best payout of Covert Orb Fragments per Energy spent, so dive into this difficulty for the best return on Energy.

The Covert Orb features Nakia character shards in the side pillars and characters with the limited-time Covert trait characters in the center pillar, including Nakia at a higher drop rate. So open these orbs to rank up Nakia after you've collected her shards from the first-time rewards. 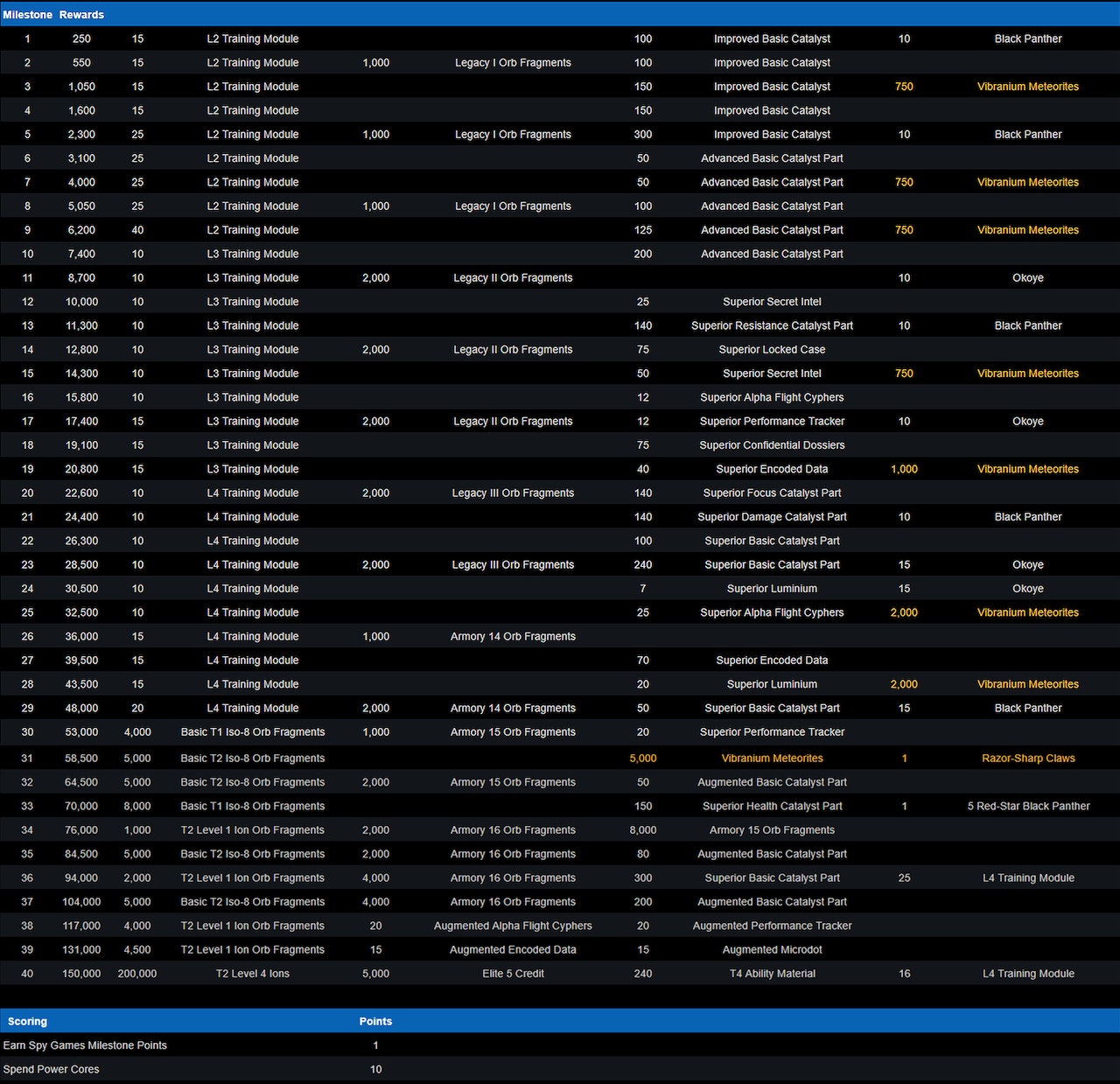 Blitz to rack up points toward this 7-day web milestone that rewards Spy Game Milestone points, which can be claimed on the web. You'll earn more points with Covert trait characters, and even more when they're equipped with Gear Tier 13 and above.

Go on a mission with your Alliance in the name of Iso-8 resources on November 25th at 1:00PM (PST) with the second run of Coordinated Assault. Spend Iso-8 Campaign Energy to earn points (1 Energy = 1 point) toward a 7-day Alliance Milestone that rewards T2 Level 1 Ions, T1 Ions, and Vibranium Meteorites for progress in The First Panther. Take a break from guarding the galaxy on November 25th at 1:00PM (PST) for Holiday Rumble. The featured trait for this Quick Rumble Blitz will be Guardian, and along with Quick Rumble rewards, Holiday Rumble will reward Vibranium Meteorites, Blitz Credits, and Ability Materials. Reach lightspeed milestone progress by winning with characters who possess the Guardian trait at 3 Stars (500pts) or go even faster with those characters at 5 Stars (1,000pts) and 7 Stars (5,000pts).

Take a little piece of Marvel Studios' Black Panther: Wakanda Forever with you on November 28th at 1:00PM (PST) with the Claws of Fury Event. Deck out your favorite Sub-Mariner in the new "Talokan" Costume and earn The First Panther progress with Vibranium Meteorites and the Heart-Shaped Herb during this killer event:

Spend 1 Dogs of War Energy Campaign Energy (not including Iso-8 Campaign Energy) and collect Nakia’s Rings from the Powerful Paws Milestone and Roar of Wakanda Milestone to earn points. Rewards include: Battle in War with War Dog characters (more points if they're equipped at Gear Tier 13+) to score points. Then head to our website to claim your rewards: Nakia's Rings, Vibranium Meteorites, Elite War Credits, and Augmented and Superior Gear.

Check our website each day for a Free Daily Claim that rewards Power Cores to help you earn points in the Battle Scars Milestone.

Feed your roster Horseman character shards on November 19th at 1:00PM (PST) with the return of Rogue's Famine Scourge Event. Whether you're adding another star to Rogue or recruiting her to your roster, you don't want to miss this opportunity. Prep now by powering up your A-Force, Young Avengers, and Inhumans in order to tackle Nodes 5 and 10 on Difficulty 5+. And just like last time, players that already have 810 Rogue character shards will be moved to the separate Champion’s Bracket where there will be separate Milestone Rewards that don't include Rogue shards.

With all of the excitement around the recent Version 6.5 Release, we failed to mention that a Scourge Event leaderboard update went live. Previously, leaderboard ties were identified and addressed after a Scourge Event ended, which meant you wouldn't know your final placement until an Inbox arrived with your rewards. We were also breaking ties based on individual Total Collection Power.

The epic journey to confront and take down Apocalypse enters a new chapter with the upcoming Death Scourge Event. Today, we're revealing some of the event's details to help you brave the challenges and recruit Archangel, Apocalypse's Horseman of Death.

To help you prepare your roster for this test, here are the traits you'll need for each difficulty:

Of special note are the three Scourges that affect Minions: Undead Swarms, Rise Anew, and Super Soldier Serum. These Scourges are all worth a hefty 23 points and will affect all Minions in a battle – player Minions included! Keep these Scourges in mind, especially for the first two nodes, which require Minion characters, as they can be used strategically to support your own Minions.

The Scourges being removed are: Pyrrhic Victory II, Dark Rally, Power Fatigue I, Power Fatigue II, Power Syphon I, Stay Down, Stage Fright, Flight or Fight, and Rope a Dope. Get more bang for your buck during your MARVEL Strike Force holiday shopping with the upcoming Cyber Turkey Hunt. This premium event will start on November 23rd at 1:00PM (PST) and is a great way to get even more rewards from in-game and web offer purchases. If there isn't an offer that tickles your fancy, there'll be some Cyber Turkeys trotting around – in the login calendar and others via Free Web Offers. Here's how this premium event will work:

Mojo is back to exchange Ratings for fabulous prizes during Season 26 of Mojo's Mayhem. The featured reward this season will be Brawn character shards, so get ready to Blitz and crush enemies in Real-Time Arena to walk away with rewards, courtesy of your favorite Spineless One.

Have you visited MSF.gg recently? Along with faster load times than marvelstrikeforce.com, msf.gg recently received a few updates that are part of our transition to a unified site. Head over to msf.gg today and check out what's new:

You can now access the Updates, Store, and Milestones section of MarvelStrikeForce.com from the top navigation bar on msf.gg. Enjoy a speedier experience while managing your roster and resources!

When logged into msf.gg, tap your Commander Name in the top right corner and then tap ROSTER on the dropdown menu to sync your roster for easy management.

While you're grabbing your web milestone rewards and managing your roster each day, be sure to also collect your Free Claim. Keep an eye out for special Free Claims during some events and on Free Claim Fridays.

Mister Negative on the Web

We've got two new faces and an update on the way to the Elite Store. On November 23rd at 4:00PM (PST), 6 and 7 Red Star Promotions are being added to the Elite Store for Iron Man (Zombie), which can be purchased using Dark Promotion Credits.

S.T.R.I.K.E. Salute continues the celebration of our Commanders with a special Free Claim on the web for Gold, Training Modules, and Vibranium Meteorites for The First Panther month-long event.

While this Free Claim will only be available for 24 hours (ending November 19th at 1:00PM PST), keep an eye out for more Free Claims every day on the web!

Our next weekly blog will be on December 2nd.