Praise Odin! Fighting for Asgard and Nexus Earth on this day and all the tomorrows are two of the strongest warriors to ever cross the Rainbow Bridge: Mighty Thor and Valkyrie. They’ll join the previously mentioned Heimdall, Sif, and Thor on the new Hero Asgardian team, who will be tasked with defending the halls of Helicarriers. We’ll kick off this meet and greet with one of the few beings to ever be worthy of lifting up Mjolnir: Mighty Thor.

After being hired as a nurse by Doctor Donald Blake to assist him in his private medical practice, Jane Foster soon fell in love with the doctor and discovered that Blake was actually the human identity used by the Asgardian god Thor. The two enjoyed a short-lived romance before going their separate ways, with Jane eventually becoming a doctor and treating heroes like the Avengers. But when Thor lost his worthiness to wield the magic hammer Mjolnir, the mystical weapon sought out a new, worthy owner. Jane Foster became the Mighty Thor and endeavored to protect Earth and Asgard from powerful threats such as Loki and even Odin himself. As the wielder of Mjolnir, she is bestowed with power equal to that of Thor, including superhuman strength, speed, stamina, and healing, in addition to mystical powers such as energy projection, weather control, and flight.

Mighty Thor is a Controller for the Hero Asgardians and features High Focus and Health stats to help her thrive in battle. Like a bolt of lightning, Mighty Thor is a surge of power and her role on the team is to provide Charged to her Asgardian Hero allies. This mechanic will allow Thor’s Passive Ability to trigger more frequently and make Valkyrie’s Ultimate and Passive Abilities more powerful. Not to be outdone, this Goddess of Thunder also possesses a Passive Ability attack that triggers after collecting 5 Charged.

The Valkyries were female demigoddesses tasked with leading the souls of slain Asgardians to Valhalla. Originally, they were nine warriors who rode winged horses, but the Valkyrie ranks eventually grew into an army and helped fight in the name of Asgard against the likes of Hela and Malekith the Accursed. One of these mighty warriors is S.T.R.I.K.E.’s own Valkyrie, who possesses powerful inherent mystical powers that give her superhuman strength, stamina, and resistance to injury, as well as resistance to enchantments. Valkyrie, like her peers, is also an extraordinary warrior, wielding a sword and shield with deadly precision and capable of going toe-to-toe with the universe’s most capable fighters.

This Hero Asgardian warrior prefers to get her hands dirty in battle as a Brawler with high Damage and Health stats. Along with cutting down foes, Valkyrie also applies positive effects to her allies upon a Hero Asgardian death, empowering the survivors to avenge the fallen. This powerful Passive ability allows the Hero Asgardians to turn the tide of battle should an enemy manage to pick off someone from their ranks.

Arriving with the upcoming Version 6.2 Release is the new 7 Day Login Streak, which will help optimize your daily time in game and related rewards. After logging in for seven consecutive days, you’ll enjoy automatically completing several Daily Objectives, additional rewards for spending your Campaign Energy, and the new Raid Sim feature for select Raids!

Each day you log into the game you’ll build up your streak, and starting on your seventh straight day the 7 Day Login Streak will be activated. Continue logging in each day after the seventh day to keep your streak alive and continue receiving the benefits. You’ll have until your Daily Objectives reset (Midnight UTC, depending on your time zone) to log in each day.

Commanders Level 64+ will have the following Daily Objectives automatically marked as “complete” and be granted the corresponding rewards:

Available in the Doom, Ultimus, and Greek Raids on select nodes for Commanders Level 62+ will be able to use the new Raid Sim feature. The aim of the Raid Sim is to allow you to cruise through the easier early nodes, to afford more time to strategize for the more difficult later nodes. Doom Raids and Ultimus Raids will allow you to sim approximately up to 60% of the Raid, while you’ll be able to sim approximately up to 80% of the Greek Raids. We’ll be closely monitoring the effects of Raid Sim on overall gameplay to ensure it’s having the intended impact.

Players will unlock new milestones related to spending Campaign Energy. The rewards will be divided by Commander Level:

Arriving with the limited-time Gambit Raids on June 15th at 5:00PM (PDT) is your chance to hit a rewards jackpot with the Ace of Raids Event. Stack up Gambit character shards, progress towards Rollin' Rebel with Disco Balls, and more during this milestone event that’ll run twice (7 days each) back-to-back.

Battle your way through Gambit Raids to earn points towards a 7-day milestone that runs twice. The first run will reward Gambit character shards, Disco Balls, Mutant gear, T4 Ability Materials, Gold Orbs, and more, while the second run will include all those rewards alongside Dazzler's Glimmer Bracelet, earning you 10,000 milestone points for Rollin' Rebel. The higher the Gambit Raid difficulty and the further you go into the Raid lanes, the more Ace of Raids milestone progress you'll earn.

Earn Gambit Playing Cards through clearing nodes in Gambit Raids, and Ranked Rewards at the end of each Gambit Raid. Support your Gambit Raid efforts by earning Kinetic Raid Energy and Kinetic Health Packs from battling in War in the 7-day Double Down Web Milestone (which will repeat once). Head over to our Milestones page starting June 15th at 5:00PM (PDT). Use Uncanny X-Men and Unlimited X-Men characters in War to earn the following additional points:

The above points are additive, so you'll receive those points on top of points received for a battling in War, and with select characters alongside their previous Gear Tiers. Get ready to quickly rumble on June 16th at 5:00PM (PDT) with the upcoming Power Armor Strut. This week the featured team will be – you guessed it – Power Armor. The Power Armor Strut Milestone will reward Disco Balls, Blitz Credits, Basic Orbs, Legacy I Orbs, Legacy II Orbs, and Mega Orb Fragments as you score wins through either Blitz or Blitz Sim (40 PTS). Jet through the milestones even faster by winning with characters who have the featured trait at 5 Stars (1840 PTS), and go even faster with those characters at 7 Stars (4120 PTS). 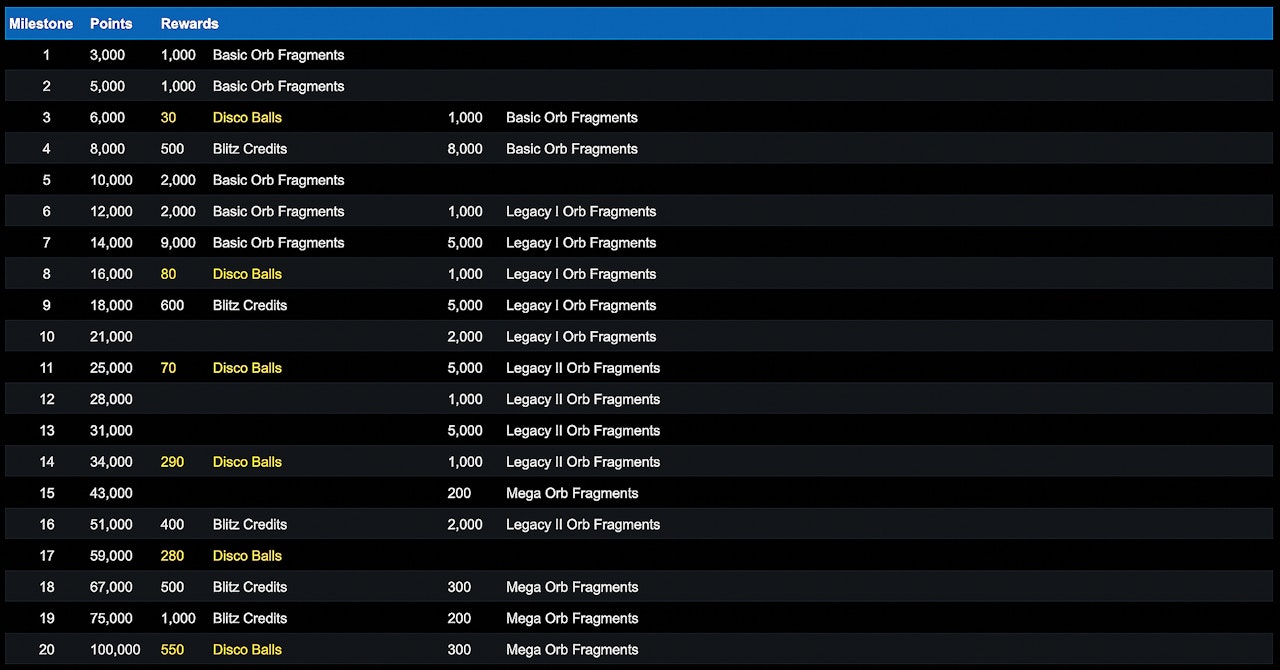 The new Scourge Events have provided the opportunity to revisit the availability of shards for new characters, especially the Horsemen, as they unlock at only 3 Stars. With the return of the Pestilence Scourge Event still a couple of months away, we want to give players the opportunity to grab some shards for Morgan Le Fay sooner rather than later. If you fell a bit short of unlocking Morgan Le Fay or are close to her next Star level, you’ll want to check out the new and improved Pestilence Orb, which contains moderate quantities of Morgan Le Fay character shards along with Darkhold, Dark Hunter, and Web-Warrior characters. The “old” version of the Pestilence Orb has been renamed to the “Astral Arachnid Orb” and will contain gear and character shards for Web Warriors and Dark Hunters. Be on the lookout for offers that contain limited-quantities of fragments to open this new orb and get your Morgan Le Fay to the next level before her Scourge Event returns.

Going live with the upcoming Version 6.2 Release will be updates to the names of several gear pieces. The updates are only to the text and won’t affect crafting or the gear trees. The changes will allow us to apply the gear to more characters without being fictionally hindered by the name. Here are the updates:

The Doom Campaign will be gaining the influence of the Power Cosmic on June 14th at 5:00PM (PDT) with the arrival of Silver Surfer to node Doom 1-9. Negasonic character shards will have a new home in the Raid Store.

Requirements: 5 Pym Tech characters at a minimum of 5 Stars to recruit Jubilee